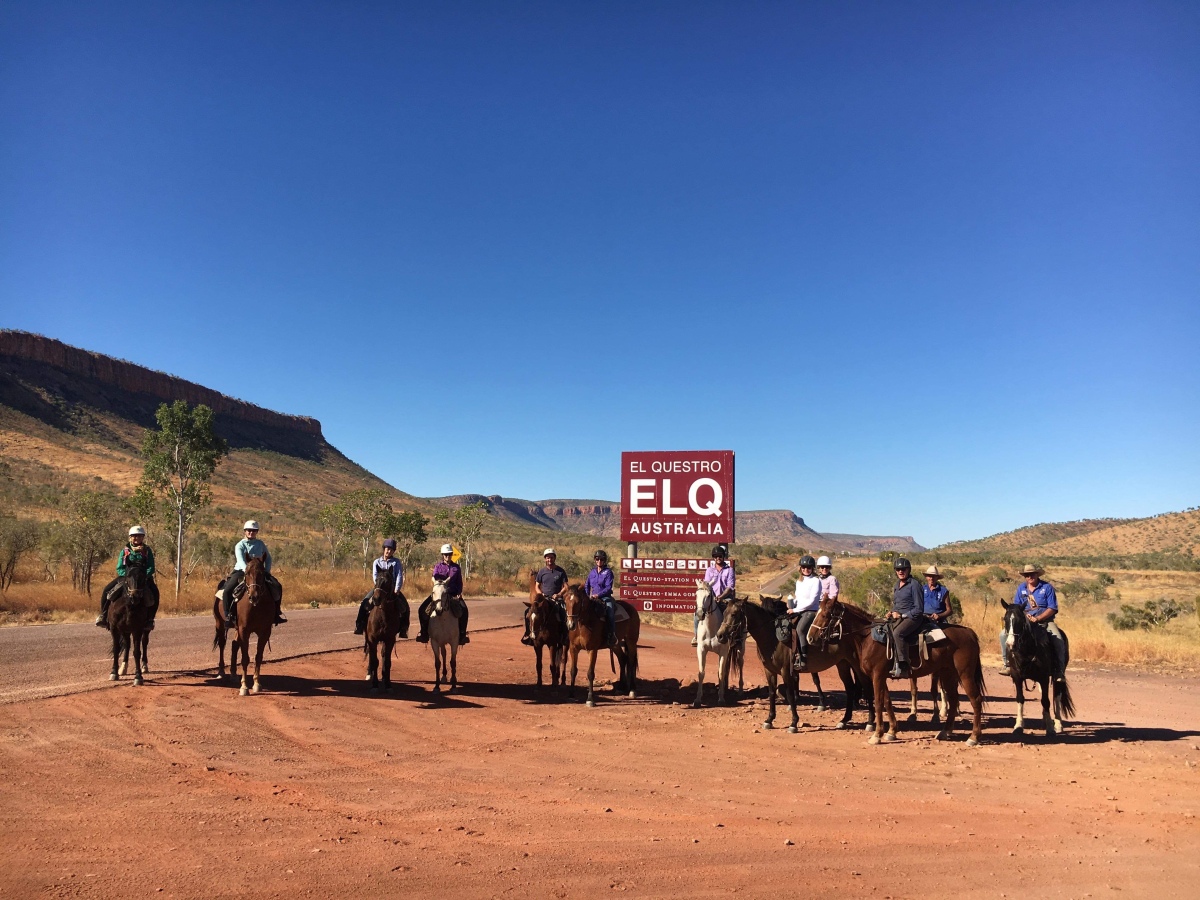 Anyone pick up books at Op shops?

I had never heard of this family.   I had heard of the Kimberley’s, Kakadu and Arnheim land and had a vague idea that they were all ‘far up there’.

With the Sons in the Saddle, the Duracks and that land ‘far up there’ were brought together.

I read about  hours and hours in the saddle, the mustering of cattle from almost one end of the continent to the other.

I read about their sleeping rough, eating even rougher, breaking bones, dying cattle, injured horses.  I read about them having to swim rivers and through it all, cope with the extremes of climate with a wet wet season filled with mosquitoes and fevers.

“the day they got into the paddock it rained sixteen inches at Ascot.  Parry’s Creek became a torrent, flooding the plains to a depth of about five feet and all the rivers were swims…..  Next evening we were attacked by myriads of flying ants which crawl all over you and leave their wings behind.  Anywhere there is a light is soon about two inches deep in wings.   This is not exaggeration.  It’s a fact..”  (Sons of Durack, Roy Phillips letter to his mother 21 Jan 1912)

1904  “terrible bush fires devastated hundreds of square miles of country destroyed fences and yards and had all hands out fighting the flames for several weeks.”

I read such stories – they are fascinating and endless.

Constable Henry Parker disappeared suddenly.   “last seen strolling down the Wyndham jetty to visit a friend on the S.S. New Guinea.”   This was solved a few weeks later when Jacob Kuhl made the following deposition:

“Yesterday I caught an alligator in a trap I had set up on the gulf.  I shot him and took him down to the jetty and skinned him.  Then I opened him up and found some clothing like portions of a uniform…. and some human bones.   I put them all into a bucket and took them to the Police Station……”

And to clear the record, that alligator Must have been a crocodile as alligators are not, nor ever were found in Australia.   They, the 4 legged swimming ones,  and the Alligator Rivers were so named by Phillip Parker King, the first English navigator to enter the Gulf of Carpentaria.  He had previously travelled in S America, knew the alligator and assumed these were them (doubt he even knew there was a crocodile) and in his wisdom he named the rivers the Alligator Rivers (South, East and West Alligator Rivers).

Well give him a break – can You spot the difference?

Crocodile – or is it the other way round?
Despite the length and small print of this book, I have persevered precisely because the stories are to interesting. 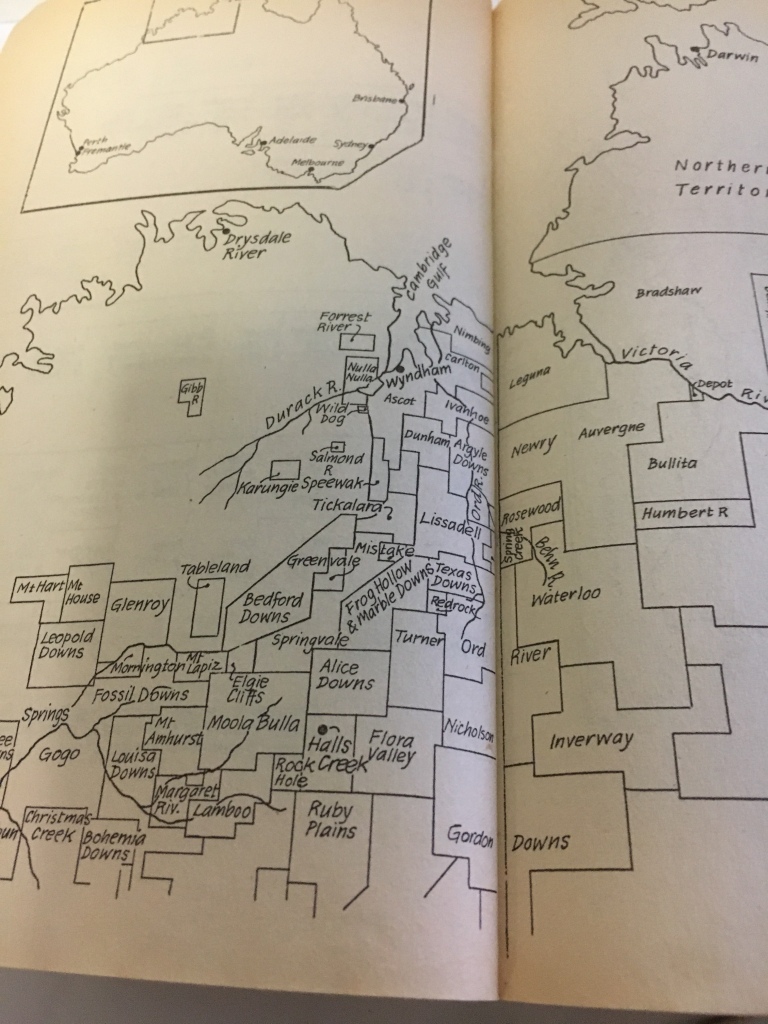 And then suddenly I found myself ‘up there’ looking at a local map with all the names that had become familiar in the book.

I was going to ride through the very plains they had ridden through so long ago.

I do, however feel the need to acknowledge some minor, okay, perhaps not so minor,  but rather fundamental differences between me and them.   I knew where I was going.   Correction.

Like them, I had no idea where I was going, but unlike them, my  guides did know what lay ahead.   Poor MP and his ‘mob’ – look what they missed out on.  No roads, no phones, no google maps, no back up vehicles; just their wits and physical strength.

Regardless of these advantages, this was an adventure which was greatly enhanced by having read about those who went before me. (photos: Sons in the Saddle, Mary Durack) 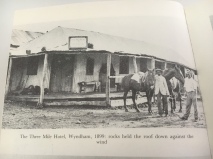 It was also enhanced by all that I learnt on the tour to Kakadu and Arnhem land.    So much gained in such a short time that I would love to share with you, but that feels almost like a different story there was so much.

The concept of justice, punishment and restoration, the knowledge of genetics thousands of years before we had even thought of it, and so it goes on.

Not really that surprising when you think I was in a land with rock faces 1.8 BILLION years old and a people who had lived, the same way, (until we arrived) for about 65 000 years.

But as usual, I digress.

Here we were in Kununurra the night before our ride.   Some of us had met at Darwin airport hopping onto the only flight into Kununurra so by the time we landed, needless to say we were old friends. 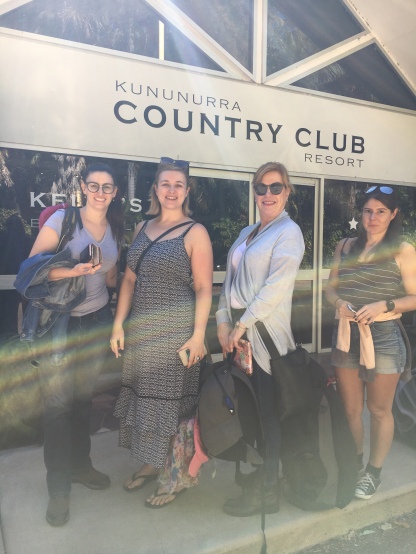 Alcohol rules are strict in this part of the world so our first stop was at the bottle shop, driver’s licence in hand.   This, it would appear was more important than money, because without it, money is useless as you could buy not even one can of beer.

Mind you,  with it, you could buy only a few more cans than one; there is a strict limit on the volume of alcohol allowed per driver’s licence per day!

But gleefully, as you can see from the video, we had our ‘stash’ and

A pretty little town, growing in leaps and bounds, situated in the middle of nowhere.

Well actually that is  not true, it is on the Ord River which means there is heaps of water – and accounts for its growing agriculture development and tourist industry. 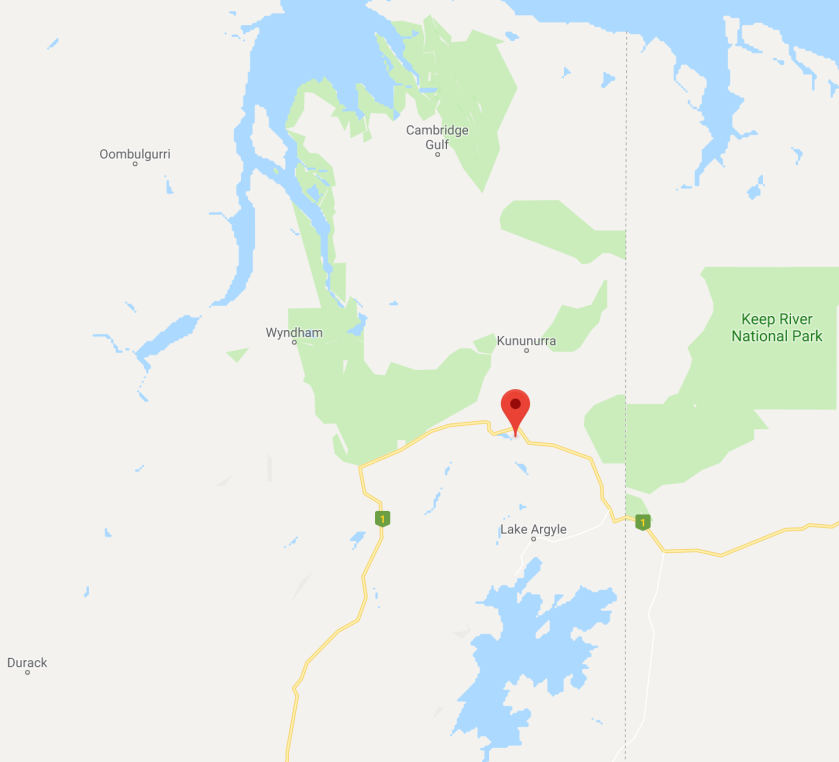 We explored that water, with a Fabulous dinner cruise on Lake Kununurra.

And then it was all over,  our cruise came to an end and we were delivered back to our respective hotels, all weary and ready for bed.    That is, until we looked at our watches, it was 6.45pm and Pitch Dark!!!!!   There was some debate about how can we possibly go to bed so early  versus, it is very dark and we are very tired.   A very strange feeling.

But bed won over in the knowledge that an early start awaited us.

When we were collected by Laura and Chris of Hidden Trails ,

and driven to the start of our ride – Doon Doon Station.

The names of all these places intrigue me –

they conjure up images of another era and I love them.

Wished I could remember the names of our horses and perhaps more importantly the names of the riders on those horses.

This, you understand is particularly important since they would be my companions for the 6 days, and knowing what to call them, or more accurately, what they call themselves would be most helpful.

I practiced things like, green shirt, Jen, (she better not change her shirt); 2 girl friends, Deb and Naomi (hope they don’t have a fall out and separate); couple Paul & Fiona, ah, but there were 2 couples, so that complicates things….. you get what I mean.

I am proud to say that by day 6 I was pretty certain I had the correct name attached to the correct person.   Not so with the horses.

Truth be told, I didn’t take my brain that far and didn’t even try.

I have been on trails where, even after 5 days I have had to ask someone which horse was mine.

They kind of all look similar, or at least to my novice eye.

Usually dark; generally with 4 legs, a head at one end, tail at the other, and of course two ears which tell one so much about where they are at right at that moment and the eyes.   Those melt your soul eyes, but which can also blaze with a look that has kept me well away from them, waiting for someone better equiped than I to approach them.

I had a tiny horse, the smallest by far of the group, so easy to see if I looked between the legs of the rest of the mob.

A Brumby, the real deal.

Or perhaps not, because I have just researched the Brumby and it is described as “a free-roaming feral horse in Australia.” (wikipedia) but there was nothing feral about My Brumby.

Tinker – easy to remember thankfully,  (from Tinkerbell I am guessing as she belongs to 6 year old Maddie who kindly let me ride her) was not feral at all but very well behaved.

Well mostly, but more about that later.

And so before we knew it we were in the saddle, and distracted from names by what was around us.

The scenery varies, the people change,

but the rhythm of a trail ride is essentially the same.

Hours in the saddle, exploring the landscape.

The sound of the horses and the creak of the saddle somehow perfect company.

We pause along the way,

to marvel at a view,

look at the intricacies of nature.

And we stop,  in this case, to sleep out in the open.

In ‘swags’ (rolled up canvas beds).

Just the most comfy mobile home ever.

Find yourself a spot, unroll your swag and Bingo.

My socks and swag

And that trail riding rhythm includes caring for the horses.

Without the latter, none of the former would every happen.

These horses are SO loved.

Don’t think it is only the horses that are cared for.

Oh no, on these trail rides our food is delivered with equal care and love.

Whether it is lunch on the road, being met by the truck with a delicious meal, drinks, and smiles, or sumptuous dinners round the fire :   we do not go hungry 🙂

There was ‘girl’s time”

There was ‘boy’s time’

We had time too, to soak our bodies.

In a wonderful billabong, minus the crocodiles, right beside our camp.

There was private time, each in their own heads, with their own thoughts. 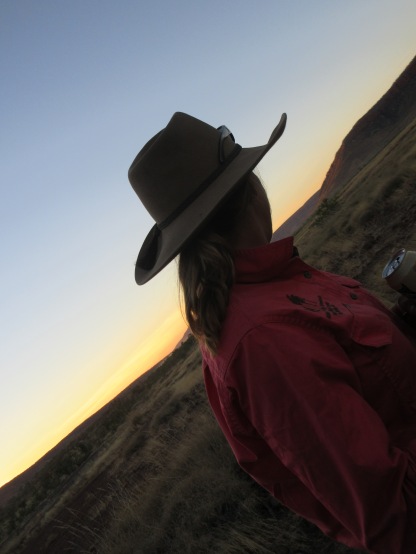 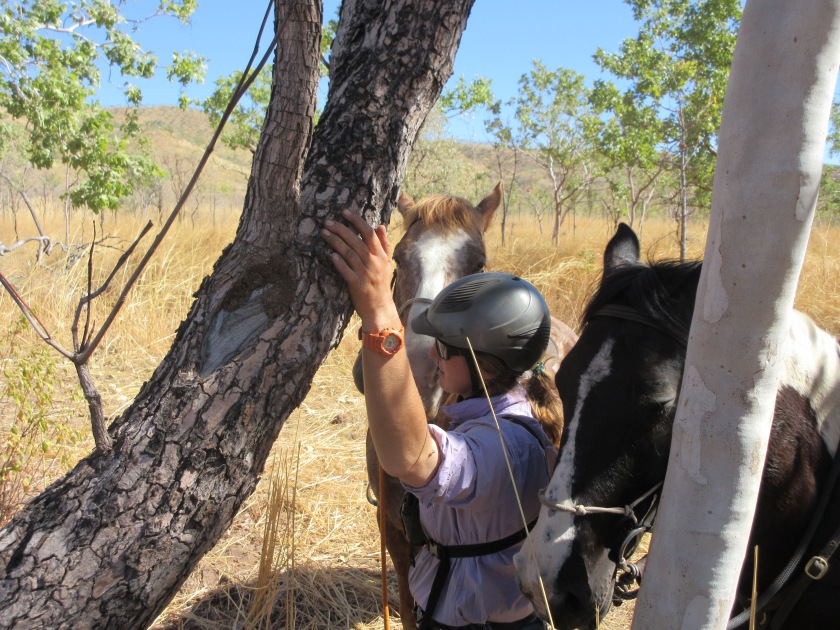 There were fun times,

crazy as only people who have camped out together can be….

comfortable with one another

There is so much to see, from memorials to those gone before us, 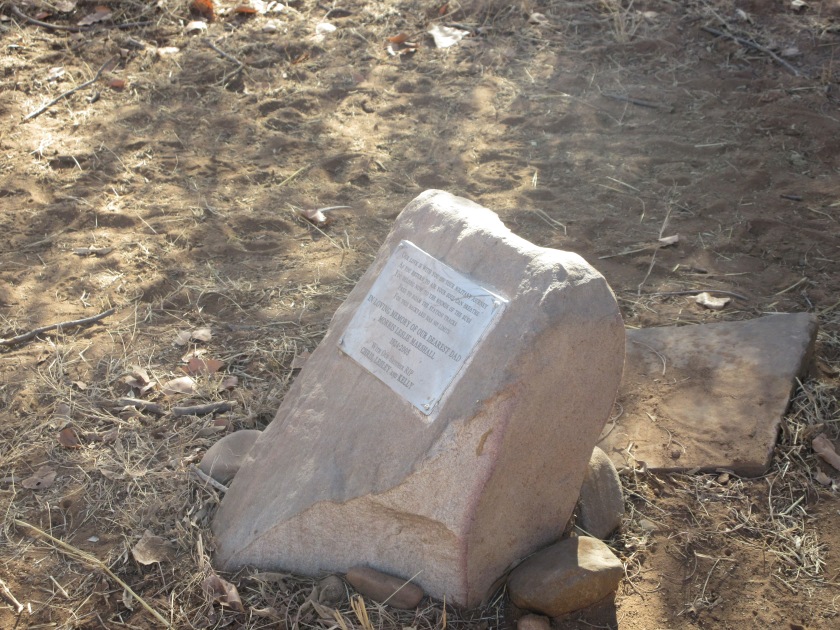 To that which will be here long after we have gone.

And endless other adventures.

Goodness me, we did So much. 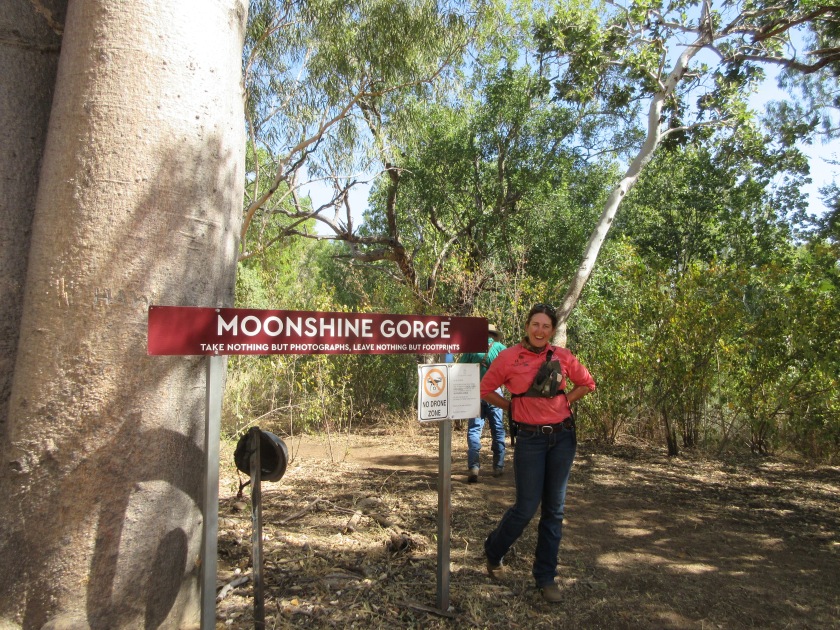 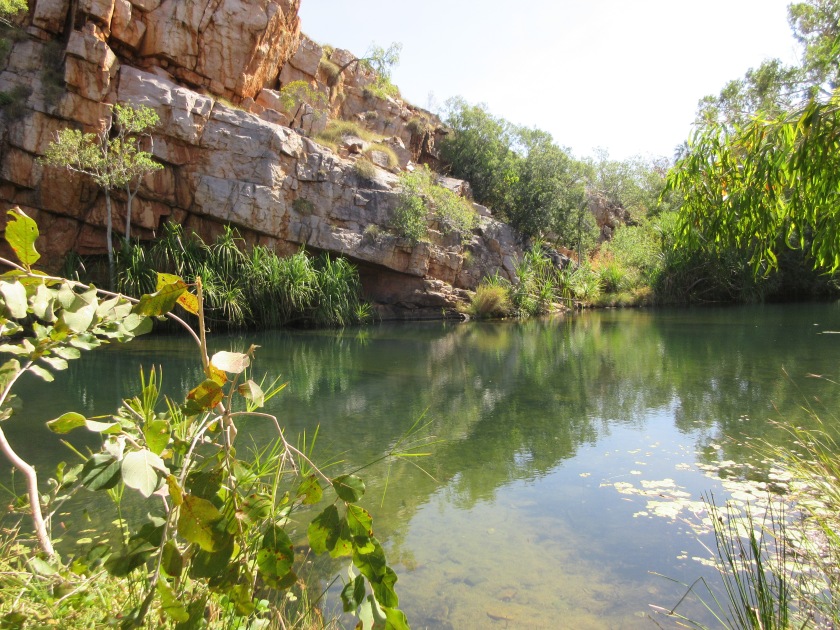 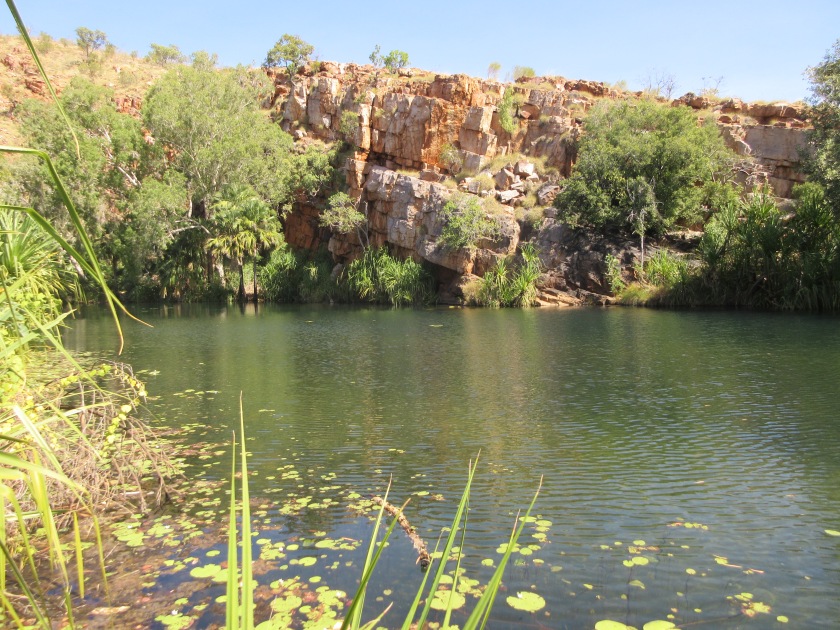 There were rivers to cross

with or without a rider. In my case, it was with me on her back, without any warning!!!! So one learns

And of course the ‘serious’ river crossings- no photos. Too busy keeping dry (I had a tiny horse remember) and staying on!

There were gorges to climb.  In this case Emma Gorge 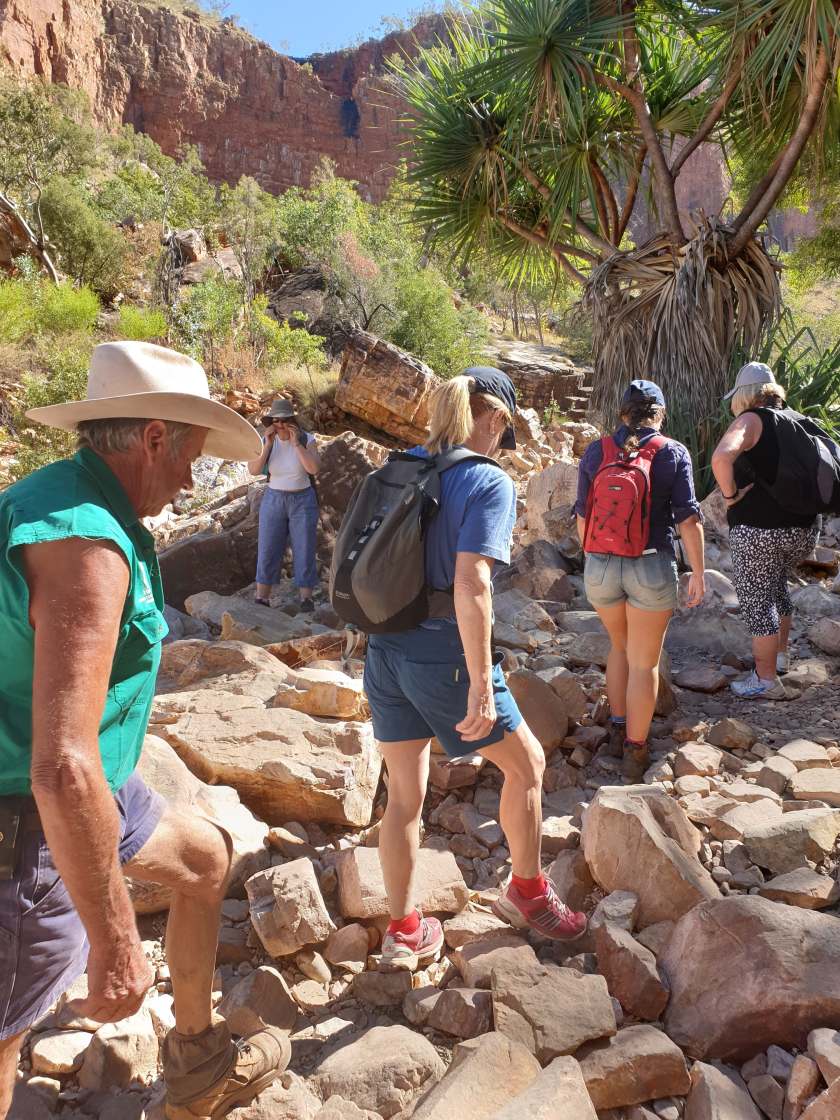 There were springs to swim in. 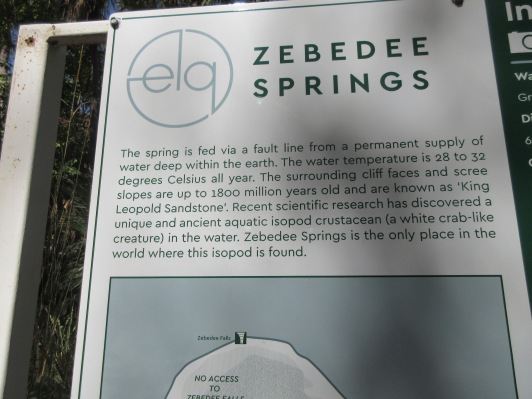 And suddenly, a helicopter ride and it ‘was all over’ 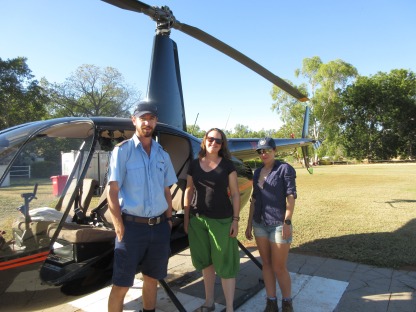 No photographs or words can even closely match the wonderful memories of this amazing part of our country.   The sights, the friends, the horses, all are such that

I want to go and do it all again. 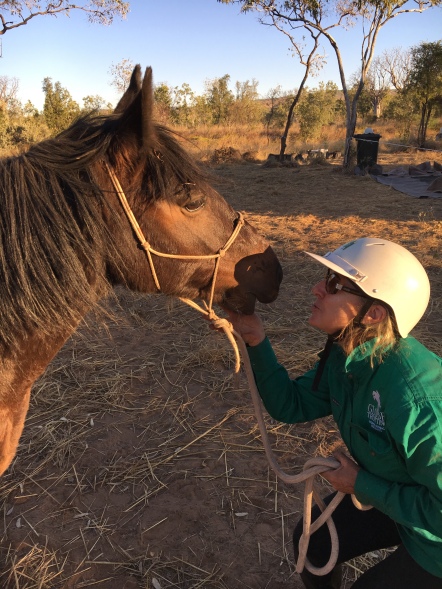 Thanks Chris and Laura for such an amazing time.

3 thoughts on “Duracks, pastoralists, the Kimberley’s and me”